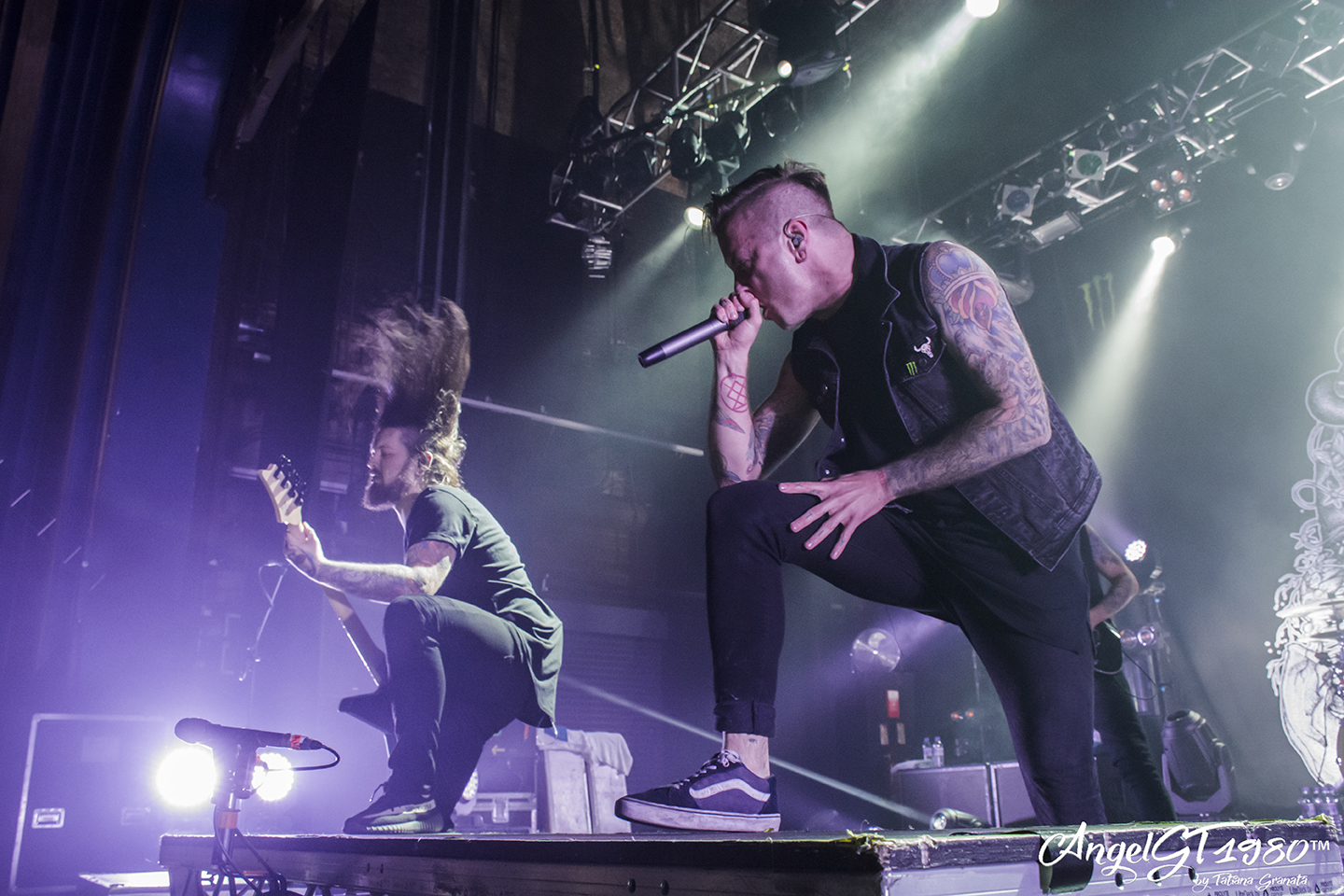 What to say, if the mountain won’t come to Muhammad then… Ondalternativa flies to London. This time is to attend the last day of the Earthbound Tour organized by the dynamiter Bury Tomorrow, British metalcore band met last June at the Alcatraz venue in Milan during the Killswitch Engage event. However, this time it’s them to be the headliner and we are finally able to enjoy a performance longer than the usual half-an-hour-opening-act thing.

Starting at 19:30 with the German Any Given Day followed right after by the British Black Peaks, both unknown to us, but nothing to point out about the first one as it pops out from the metalcore caldron, but about the second one we have a few doubts (a placid progressive rock maybe with the purpose to cool down the adrenaline night?). But nothing to be worried about because right after 9pm the atomic Crossfaith jump on the stage and the audience go nuts, triggering the hell in the pit.

Yes, we know them pretty well as it’s been two years since Ondalternativa is been following their traces and they never let us down. Can you believe how popular these fab 5, coming from the land of the rising sun, are in the UK? YES WE CAN! And so does the sold out venue, screaming and calling out for them once they start to make their first appearance on stage, first Teru (keyboard) then Tatsu (drums) for a quick sound check (yeah sure, quick? What does that mean? Let’s say that the young drummer gifted the public, and those who had never seen him live before, immediately with an astonishing taste of his incomparable skills… machine-gun fire and the audience is already on a frenzy-wave, wicked!).

The setlist is short but dense, going through old hits coming from the album Zion till the new release “New Age Warrior”, but I think the two most noteworthy moments (and devastating) of their thirty minutes live have been the popular cover track of Omen (by The Prodigy), when Ken made everyone sitting on the ground in a blink and had them jump in the air under his command, and during the closing track “Countdown to Hell” when, like a very well trained puppeteer, asked the public a WOD (Wall Of Death) from which we saw going out people bleeding and crying like fighters in battle, but happy to be there and part of the show. I have to admit that this band is not for the faint of heart, I don’t think I’ve ever seen any other artist putting so much energy in a live performance, keep an eye on them folks!

A little after 10pm it’s time for the main act, Bury Tomorrow and their metalcore with capital letters. No kidding here (not even from the people throwing themselves in crazy moshpits) and the growling and screaming coming from Daniel roar in the London theatre. This is the last day of their UK tour and finally we get to see them in a first rate show, longer than one hour and where nothing will be left to chance.

The blue lights, that brought BT on stage, gradually fade away and turn into a white psychedelic rays while the first track “The Eternal” (from their last album “Earthbound”, also naming the tour) opens the ball. Dani’s growling, not as much deep as pissed, is softened by the melodic voice of Jason (rhythm guitar and vocals) and by a rapid sequence of breakdowns that make the track an awesome opening. The guys “in da pit” are already fairly overheated and we start to see the first injuries and bugs (and me, who thought that Sabaton fans were the worst – in a good way obviously lol). Before “Memories” take the scene, Dani calls a circle pit and I let you imagine what happened then, let’s say that the opening rhythms of this second piece, fast and penetrating, had everyone in the venue going nuts, making the choirs on “Just a memory gone…” covered even Jason’s voice.

A few minutes of thanking the audience when Dani even said that probably all the people there would get tired of listening to him saying “thanks”, so much respect for this band!

Let’s carry on with the old “Waxed Wings”, part of their 2009 debut album “Portraits”, a little less elaborated compared to the newer ones, but always of a great impact on the fans who do not hesitate to sing along and form a WOD, under the careful guide of their leader.

It’s time for “Knight Life”, part of “The Union of Crowns”, still my favourite album (without diminishing the following) but I think this one has the edge over the others, technically and musically speaking; a must for Metalcore lovers. This song, like all the rest of the 2012 album, starts with a colossal pace and the thing that strikes the most is the contrast between the melodic riff coming from Kristan’s guitar (lead guitar and backing vocls) and the dogged and powerful rhythms of the base (on which obviously the people go crazy doing crowd surfing).

To the strains of “AN Honourable Reign”, from the same album as the previous one, the crowd voice goes along JC’s before Dani jumps down to meet and greet the first row (poor Security guys, what a messy job they do ☺).

It’s time for “Watcher” and “Of Glory”, from the mystic album called “Rune” where every single song has been inspired by a rune (Watcher is indicated by the rune Algiz and Of Glory by the rune Wynn, but this is another long and complicated story, let’s move on then). Mighty and heavy, the rhythms of these two songs have both the public and band jumping up and down like under some sort of spell. Back to the roots with “Her Bones In The Sand” that introduces the more recent “Cemetery” and the more the music flows the more we notice that BT have made a lot of progress during the years (the increasing number of people showing up at their lives is the blatant proof already).

Now it’s time for a brief talking about Heavy Music where Dani highlights that “if you keep coming to live of bands not so popular like us and will keep buying albums and supporting, metal and hardcore music will never die, really thank you all!” and in pursue, the notes of “301” take place, with lyrics about the music industry and its being so damn corrupt and discriminating.

After “The Burden” and before “Last Night”, Dani also asks to the crowd, to every single person there in that moment, to hold each others hands, thinking about being part of one big family, and everyone does it, no more single being but one wide human carpet that jumps in unison, keeping up the pace and this thing to see has been incredibly enthralling and touching. As touching is to think about how a music genre, from many bunglers considered to be blasphemous, can instead put together several different human races and mindsets… well done Dani!

Going towards the end with “Earthbound”, coming from the namesake album released last January, the audience still has energies to give out and it seems they want even more. No sooner said than done, the band is back after only two minutes, not even letting the people to have time to call the encore, and play “Man Of Fire” right away before concluding with the superb “Lionheart” (let me guess, you cannot imagine from the title to which album it comes from… can you not? lol) a war horse and, in my opinion, one of the best track ever; loaded, electrifying, with extraordinary lyrics that confirm once and for all the great talent of BT.

This is the last song of the night (and tour) and taa-daa all bands are now on the stage, all together to celebrate a great tour and to honour all the people there, without whom all that would have never happened. Everyone greets and thanks with the promise to be back very soon. Bury Tomorrow is not just a band playing metal, but a whole of ideals that makes everyone proud to believe in the real music and everything concerned and we, at Ondalternativa, will always support them on the long hard road of deserved success. F**KING AMAZING!